Zimbabwe bans the import of maize grains as production surge at home this year. 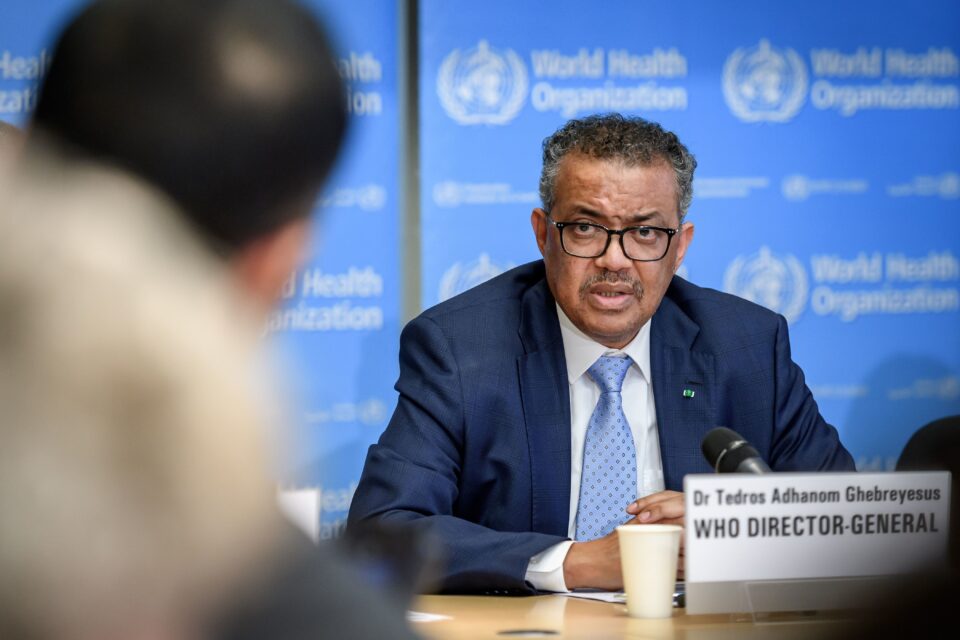 The head of the World Health Organization Tedros Ghebreyesus has gone into self-quarantine after someone he had been in contact with tested positive for Covid-19.

Tedros Adhanom Ghebreyesus, who is based in Geneva, made the announcement on Twitter late on Sunday night with Covid-19 again spreading rapidly across Europe, but stressed that he had no symptoms.

“I have been identified as a contact of someone who has tested positive for COVID19,” Tedros said in his tweet.

“I am well and without symptoms but will self-quarantine over the coming days, in line with @WHO protocols, and work from home,” he added.

According to statistics from Johns Hopkins University, Tedros has been at the forefront of the United Nations health agency’s attempts to combat the pandemic, which has taken the lives of 1.2 million and infected more than 46 million people worldwide since its emergence in China late last year.

Authorities in Slovakia said that on Saturday, 2.58 million people, almost half of the population of the country, took Covid-19 swabs as part of a two-day campaign to prevent the spread of infections without resorting to a lockdown.

He stressed on Twitter that “it is critically important that we all comply with health guidance”.

“This is how we will break chains of COVID19 transmission, suppress the virus, and protect health systems.”

People were asked to volunteer for the experiments in an experiment being closely monitored by other nations, but the government said it would enforce a lockout on anyone who did not participate, including a ban on going to work.

The deteriorating situation in Europe is contributing to the possibility of renewed lockdowns, and street demonstrations against more limits on everyday life have marked the weekend.

In Spain, after protests in cities such as Madrid, Barcelona, Malaga, Vitoria, Valencia, Santander and Burgos against the government’s decision to declare a six-month state of emergency in response to the coronavirus pandemic, Prime Minister Pedro Sánchez called for an end to the ‘inflammatory and unreasonable actions of a minority of people.

“On Sunday, demonstrations continued in Italy, with protesters in Naples taking to the streets demanding” Give us back our jobs, give us back our dignity “and calling the government” democracy thieves.

More than 300 people gathered in central São Paulo, Brazil on Sunday night to protest the support of State Governor João Doria for the mandatory immunization of Covid-19 and the testing of the potential vaccine produced by China’s Sinovac.

Trump VS Biden: U.S. Election Results, Who Is Winning?

Thanks and Best Regards,

Hey, are you starving to find the right leads?

CompanyLeads.org has launched a limited-time offer that covers all the countries in the world.

At $149 once-off you get access to over 300 million leads categorized, targetted, and ideal.

Thanks for attending one of our past events!

As a member, we will give you exclusive deals and offers from our partners which are not available to the public.

We will be sending you a few special offers every single day for the next year.

My name is Wm McKelvey and I am the affiliate manager at justdeltastore.com

I am writing to invite forsige.com to join JustDelta Store Affiliate Program.

For more information and sign up with the JustDelta Store Affiliate Program, visit https://www.affiliatly.com/af-1050770/affiliate.panel?mode=register

We look forward to seeing you onboard.

Many companies are known for their product development. That is their expertise.

As senior account executive for business development at Nutritional Products International, I have worked with brands that have created and developed innovative products that consumers would want to buy.

But these companies don’t have the staff or knowledge to successfully launch their products in the U.S. This is why many domestic and international health and wellness brands reach out to NPI.

Launching products in the U.S. is our expertise.

On a daily basis, I research companies in the health and wellness sectors, which is how I came across your brand.

NPI, a global brand management company based in Boca Raton, FL., can help you.

Through a one-stop, turnkey platform called the “Evolution of Distribution,” NPI gives you all the expertise and services you need when you launch your product line here. We become your headquarters in the United States.

What does NPI do? We import, distribute, and market your product line.

When you work with NPI, you don’t need to hire a U.S. sales and support team or contract with a high-priced Madison Avenue marketing agency.

NPI, along with its sister company, InHealth Media, collaboratively work to market your products to consumers and retailers throughout the U.S.

For more information, please reply to this email or contact me at MarkS@nutricompany.com.

PawSafer™ CAN SAFELY TRIM YOUR DOG’S NAILS IN NO TIME FROM HOME.

Get it while it’s still 50% OFF + FREE Shipping

Let me introduce you to Nutritional Products International, a global brand management company based in Boca Raton, FL, which helps domestic and international health and wellness companies launch products in the U.S.

As a senior account executive for business development at NPI, I work with many health and wellness brands that are seeking to enter the U.S. market or expand their sales in America.

After researching your brand and product line, I would like to discuss how we can expand your penetration in the world’s largest consumer market.

At NPI, we work hard to make product launches as easy and smooth as possible. We are a one-stop, turnkey approach.

For many brands, we become their U.S. headquarters because we offer all the services they need to sell products in America. NPI provides sales, logistics, regulatory compliance, and marketing expertise to our clients.

We import, distribute, and promote your products.

NPI for more than a decade has helped large and small health and wellness brands bring their products to the U.S. NPI is your fast track to the retail market.

For more information, please reply to this email or contact me at MarkS@nutricompany.com.

Thanks for attending one of our past events!

As a member, we will give you exclusive deals and offers from our partners which are not available to the public.

We will be sending you a few special offers every single day for the next year.

Hey, we are running a Black Friday special on leads.

1. I will send three amazing topic ideas that are up to the trend and your readers’ interest
2. You need to choose one topic out of those.
3. I will then send a high-quality, plagiarism-free article on that topic.

You will just have to publish it with one do-follow backlink to my website. It will be a win-win.

Please let me know if we shall start with step 1?

My name is Allan and I’m the business development manager at Creative Bear Tech.

We provide off-the-shelf B2B marketing lists with business contact details for over 400 industries.

I thought that forsige.com may find this beneficial.

To learn more about the sales leads and view some samples, please find us on Google:

Hi
How are you? I wanted to reach out to you and verify that email was a good way to reach you or We can discuss this via the telephone,WhatsApp only. +90 555 140 8097 or contact@frzuluf.com
I count in your honor for a quick response for a good deal.
Regards,
Roberts Zuluf

I am writing to learn whether you wish to grow your business activity beyond forsige.com.

JustCBD Dropship Program will enable you to start up your very own Shopify CBD store and begin selling the most popular CBD products without holding any stock or making any substantial financial investments. With the Covid-19 pandemic, people are coming to be health-conscious and the sale of CBD items and other nutraceuticals is growing at super-fast speeds. This represents a substantial business opportunity for anybody who is serious about making real money. With JustCBD Dropship Program, you can be operating your very own CBD shop in basically no time. Our dropship program has become exceptionally popular during the coronavirus pandemic as an increasing number of individuals are starting up their own online companies with us.

You will have no doubt encountered CBD goods online, in your local shop, or via anecdotal evidence from your friends. CBD comes in various shapes including gummies, oil, salves, capsules, pet treats, vapes, etc. CBD items have a very wide appeal as they can help essentially anyone: from kids and senior people to your beloved pets.

JustCBD has been featured in over 500 US media outlets. Here is what one of them has to say about us: http://dailytransparent.com/news/demand-for-just-cbd-s-vegan-friendly-cbd-edibles-sees-spike-during-covid-19-pandemic/0255026/

Do not take our word for it and give the JustCBD Dropshipping Program a go!

To get more information and enroll with the JustCBD Shopify Dropship Program, visit https://justcbdstore.com/justcbd-shopify-dropship-program/.

We look forward to seeing you on board.

We will improve your Local Ranks organically and safely, using only whitehat methods, while providing Google maps and website offsite work at the same time.

We are having a shut down sale!

My name is Pansy. Recently, I have left my permanent position as an SEO expert at one of the leading SEO agencies in India to work as a freelancer.

I ran a quick analysis of forsige.com and determined that we could boost your domain rating, SERPs and ultimately, your traffic and sales through one of my SEO packages.

You can see everything I have to offer here: https://www.fiverr.com/jamshednarayana

All of my packages are extremely affordable as I have just started freelancing and want to pass on a good deal for your site.

Thanks for your time and I look forward to ranking forsige.com on Google 🙂

I have just checked forsige.com for the ranking keywords and saw that your website could use a push.

We will increase your SEO metrics and ranks organically and safely, using only whitehat methods, while providing monthly reports and outstanding support.

Start enhancing your sales and leads with us, today!